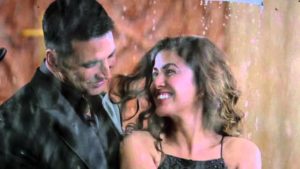 Airlift is a 2016 Indian war thriller film directed by Raja Krishna Menon, starring Akshay Kumar and Nimrat Kaur. The script, written by Raja Krishna Menon developed the idea after studying the whole incident of the war, and which he subsequently expanded. Soch Na Sake from Airlift sung by Arijit Singh, Tulsi Kumar. This song is composed by Amaal Mallik with lyrics penned by Kumaar.