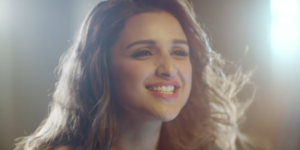 Meri Pyaari Bindu is an Indian Hindi romantic comedy film, written by Suprotim Sengupta and directed by Akshay Roy. It features Ayushmann Khurrana and Parineeti Chopra in the lead roles. This movie presents a fresh music album with diverse selection of songs. Parineeti has recorded her first song ‘Maana Ke Hum Yaar Nahin’ for the film.