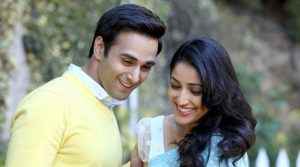 Sanam Re is a 2016 Indian Hindi-language romantic drama film directed by Divya Khosla Kumar and produced by Bhushan Kumar, Krishan Kumar and co-produced by Ajay Kapoor. The music for Sanam Re is composed by Mithoon, Jeet Ganguly, Amaal Mallik, and Epic Bhangra.

The film’s title track in the voice of Arijit Singh was released as a single on 22 December 2015.